Nashi. Li. Bae. Nashpati.Prunus pyrifolia. Prunus serotina. Asian Pear. Japanese Pear. Korean Pear. Sand Pear. Apple Pear. There are many names for the deliciously crisp and juicy pear that we grow here at Kingsburg Orchards. And we haven’t even touched on variety names yet. Many consumers are still just discovering this wonderful fruit, and it has been described as one of the “hottest new items since the kiwi.” However, these pears have been a part of Chinese culture for over 3,000 years.

Each year, a selection of our team members travel to the Produce Marketing Association's annual Fresh Summit Convention to meet with buyers, check out the latest in equipment & packaging, and network with the fantastic people who make up the produce world. I've asked each of this year's team members a few questions about themselves and Fresh Summit:

A Reason for Every Season: Fall
Posted September 30, 2013

Fall in Central California is such a transitory season. Some years, back to school offers the cool crisp evenings that mark the coming winter;...

Refrain:
When true simplicity is gained
To bow and to bend, we shan’t be ashamed
To turn, turn will be our delight
Till by turning, turning we come round right

Established in 1737, the Prince Nursery of Flushing, New York were the first to advertise plums for sale. Prince Nursery is the earliest reference to European plums in America to date. Their scientific name is Prunus domestica. Luther Burbank wrote of plums in his fourth book about small fruits out of a series of twelve. Burbank was behind the propagation of many plum cultivars and wanted to make the fruit more popular. Plum trees were very easy to grow in America because of the stone fruit that came before it. Farmers were familiar with how to grow stone fruit properly and...

This month I’m going to introduce you to Jake. Jake’s my brother and he totally rocks. He’s focused, hard working, adventurous and head-over-heels in love with Kate, my soon to be sister-in-law (yay!). Farming is in his blood, and is not only his profession but also one of his hobbies. He collects different varieties of plumeria trees and grows vegetables in the backyard in the summer. We’re talking drip systems, espalier trained heirloom tomato trellises, cucumber shades, 9+ types of peppers, monster pumpkins, the works. He enjoys woodworking, fishing, hunting, jet-skiing, snowboarding...

Every family has their own traditions, including the types of games they play. Family gatherings for my family have always included games -...

A Reason for Every Season: Summer
Posted September 26, 2013

Ah, summertime… the peak of our year… the fruit of our labors are ripe for the harvest. There are many different things going on around here in the summer and the fields and facilities are teeming with people who are picking, sorting, grading, packing, palletizing, forklifting, transporting, cooling, selling, inspecting and shipping our fruit. Not to mention our growers and field managers who are busy checking field health (bugs, soil nutrients, tree health, water conditions), determining when each variety is at its best point for harvest, directing each part of the harvest process, and...

When did you start working at Kingsburg Orchards?

I started with the company in 2004. I worked in the shipping department, on the packing line, and in Quality...

Jeff Eubanks is a long-time field supervisor for Kingsburg Orchards. He has been a farmer his whole life and has dedicated many years working for George Jackson. He enjoys fishing with his wife Colette. When he’s not working in Kingsburg he farms a small ranch east of Dinuba that has been in the family for 3/4 of a century. He has grown a variety of fruits on that land, most recently Peaches and Nectarines. He plans to plant cherries in 2013.

How long have you worked for Kingsburg Orchards?

Back to School with Apple Pears
Posted August 8, 2013 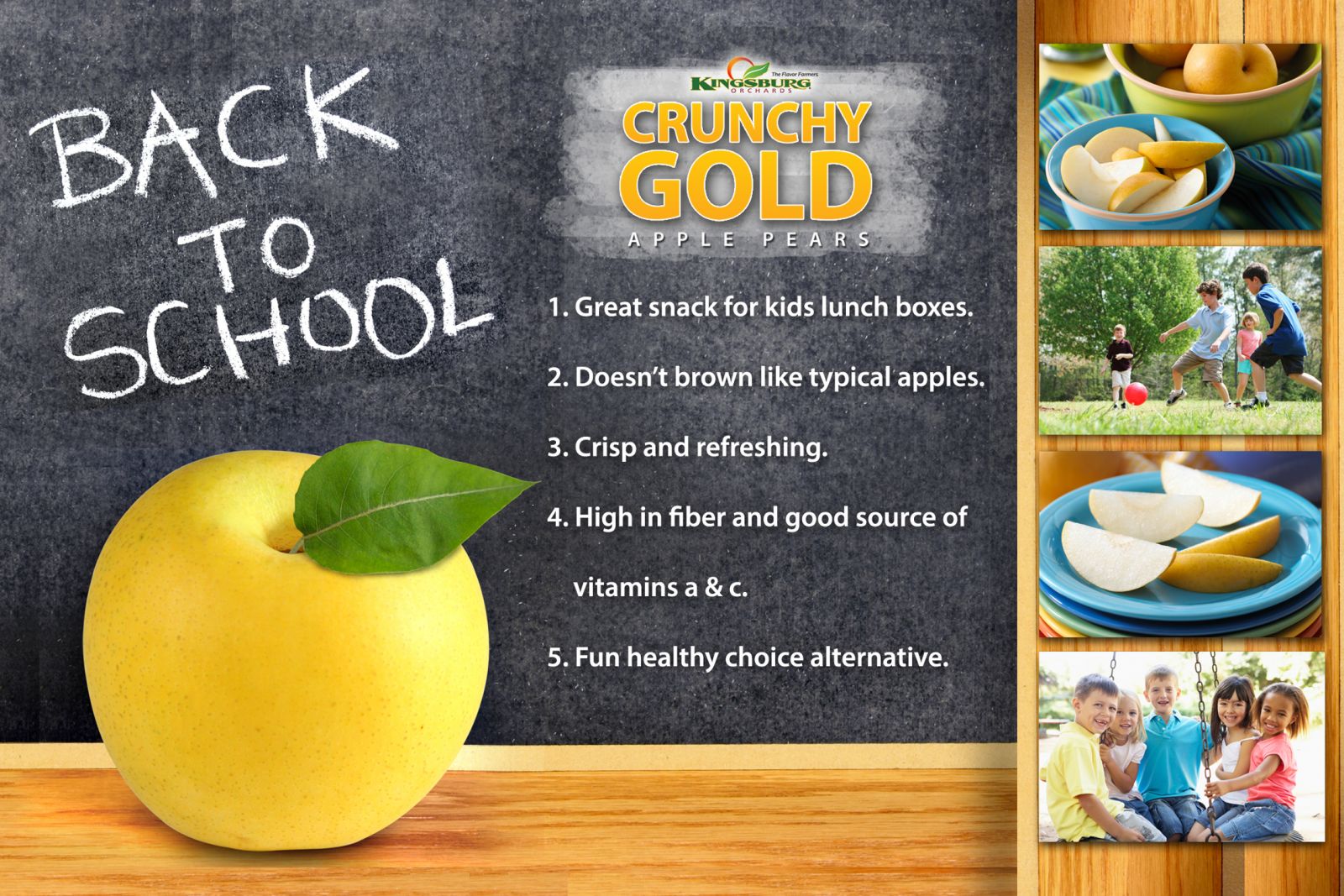 Back to School with Kingsburg Orchards
Posted August 24, 2013

Fruit isn't the only thing on our orchards that has been growing this summer - our growers' kids are sprouting up right before our eyes as well! This year three of them will start preschool and two others will move on to kindergarten, giving us four in K-3. We're definitely getting into the back-to-school spirit: lunch boxes & what to pack for nutritious lunches, backpacks, pencils, paper, and all the other trappings that accompany the academic season! The kids are all excited to see their friends from last year and for the new friends they'll make, the projects they'll create and...

Our staff had a wonderful time at the PMA Foodservice Conference in Monterey this year. Bill, Jeanette, & Jestene kept busy at the grill, talking with various retailers, supply managers, and food service teams while refilling samples of different ways to utilize our stone fruit and Apple Pears in simple, delicious recipes - showing you can bring stone fruit to the table in forms other than a fruit bowl.

They started off serving our Quick Crescent Pies as a breakfast option utilizing our Dapple Phoenix pluots...

As with many stone fruits, peaches originated in China. It is in the Rosaceae, or Rose, family; genus species Prunus Persica. From China this delectable fruit spread to Persia, where it was widely cultivated. Alexander the Great furthered its spread into Europe - paintings of peaches were even found on the walls of Herculaneum, preserved despite the destruction of Vesuvius. In the 16th century, Spanish explorers brought it to the Americas and in the 17th century it was introduced to England and France. It was widely popular and in the Victorian era was served wrapped...

Our friends at the American Academy of Chefs and the American Culinary Federation will be creating some fabulous recipes for us, which will be featured in our recipe section on a rotating basis - as well as a little bit about each of them. Our featured guest from fall 2012 - spring 2013 was Chef San Shoppell, chef-owner of Destination Chef. We had the opportunity to meet and work with Chef Shoppell at a culinary demonstration sponsored by the Hawaii Culinary Education Foundation at Leeward Community College and hope that you enjoy her recipes as much as we have.